Hardis Group's WMS solution has been rolled out in just four months in the new warehouse of the surgical kit specialist to manage receiving, storing, ordering and delivering items on its production site.

Hardis Group, consultancy firm, digital services company and independent software vendor, announces that Medline Assembly France, a company specializing in the assembly of single-use sterile surgical kits, has rolled out Reflex WMS in its new warehouse to optimize its production site processes for receiving, storing and delivering the different components of its surgical packs. 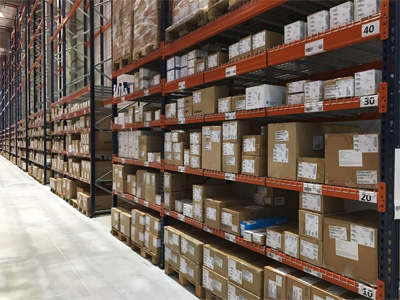 With a turnover of more than 8 billion dollars, the Medline Industries group is one of the world's leading manufacturers and distributors of medical and surgical devices for healthcare facilities. Medline Europe has two subsidiaries in France: Medline International France, near Paris, and Medline Assembly France, in Châteaubriant (44), which specializes in the assembly of single-use sterile surgical kits for use in operating theaters in hospitals and clinics across Europe. Its assembly plant now has 350 employees, of whom around 230 are in production and logistics.

Every day, Medline Assembly France produces an average of 14,000 customized kits from a catalog of 4,500 items (gowns, syringes, needles, scalpels, compresses, lancets, etc.) manufactured by more than 200 suppliers in Europe, Asia and the United States. In 2015, the company decided to directly manage the inbound supply chain of its production site, which had previously been entrusted to an external service provider. In winter 2016, it began to build a new 4,500m2 warehouse alongside its production site in Châteaubriant to re-internalize the reception and storage of components to be included in surgical kits. To cope with the increase in its business and the densification of its inventory, Medline Assembly France decided to roll out WMS in this warehouse to optimize the different storage processes.

Reflex WMS: the choice for innovation, openness and reactivity

In February 2017, with the support of TFCL (Thierry Fabris Conseil Logistique), a specialist in logistical projects, Medline Assembly France launched a call for tenders, to which eight companies responded. After a first round and baseline visits, Reflex WMS was chosen. In addition to covering all the functional specifications detailed in the technical specifications, Hardis Group's solution appealed with its technological choices (full web interfaces) and its resolutely future-focused vision: "In addition to the financial criteria, Hardis offered us complementary modules for checking upcoming receptions and innovations, such as drone inventory management", explains Loic Le Guéhennec, Head of Projects at Medline Assembly France. Hardis Group's ability to support the roll-out of Reflex WMS on other production and distribution sites abroad also made a difference. The service provider needed to be able to start the project very quickly to roll out the solution and ensure that it was operational by the summer of 2017, less than four months after the start of the project. "We wanted to take advantage of the closure of the production site in August to switch to the new system and to be operational from September", says Roselyne Hantz, Head of Stores. An extremely short time-frame which Hardis Group agreed to specifically.

Functional analysis was prepared in advance by the TFCL consultant. To complete the project on schedule, the choice was made to focus initially on critical processes and functionalities, before progressively and iteratively rolling out developments. Reflex WMS was rolled out in the new warehouse from July 2017. August was spent implementing the processes for receiving components. When activity started up again after the summer holidays, the processes for the preparation of orders and the delivery of components on the production site were implemented. "We preferred a gradual start to train the teams to use the new system and to strengthen our own processes. The support from TFCL and Hardis' teams was key to delivering this ambitious project on time", explains Eric Huguet, Head of Methods and Development.

Medline Assembly France's new warehouse today employs 10 workers. Thanks to Reflex WMS and the implementation of new internalized processes for receiving, storing and delivering components, Medline Assembly France anticipates substantial savings, all while improving the responsiveness and quality of the service it offers its customers.