Hardis Group, a consulting firm, digital services company and independent software vendor, has announced that Allopneus.com, France's leader in tire sales and fitting, has acquired Reflex WMS to manage goods receipt and warehousing, order preparation and shipment operations at its new logistics platform in Valence in south-east France. Combined with an automated system for packing, film wrapping and moving orders to shipping bays, the warehouse management solution has boosted logistics efficiency in an increasingly complex market. 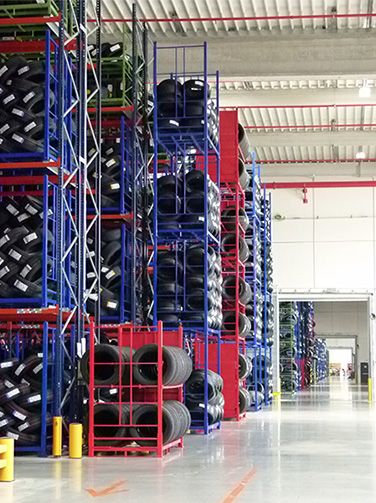 Created in 2004, Allopneus.com is a completely French company with its head office in Aix-en-Provence. The pure play sells over 25,000 items at highly competitive prices on its e-commerce site: tires for passenger cars, commercial vehicles, 4x4s, motorcycles, quad bikes, agricultural vehicles and trucks as well as aluminum and steel rims. Allopneus also offers fitting services which today cater for 90% of vehicles at its 6,000 approved tire fitting centers for passenger cars and an exclusive at-home fitting service. In 2017, the site sold 3.5 million tires of all categories, positioning it as France's leading tire retailer.

The tire market has become more complex in recent years. More tires with more diverse characteristics (bigger tires due to the growth in SUV sales, tires which are specific to makes and models, 4 Seasons, etc.) need to be stored in order to meet demand. At the same time, Allopneus' growth in agricultural, industrial and transport markets means that it needs to store larger tires. Its existing 41,000m2 warehouse in Oignies (Pas-de-Calais) was reaching saturation point. At the beginning of 2017, prompted by this situation and its desire to grow on an international scale, the pure play decided to build a new 84,000m2 logistics platform with a total storage capacity of 1.25 million tires. The warehouse will be located in Valence in south-east France to be close to snowy areas, a large market for winter tires. The company also decided to upgrade to new warehouse management software to make all the systems paperless as the existing WMS was showing its limits and required significant maintenance due to the numerous specific developments.

Reflex WMS: flexible configuration and interface with the ERP and WCS

In February 2017, three software vendors were invited to tender. Reflex WMS was selected at the end of the tender process in March 2017. In addition to its functional coverage, meeting all the requirements of the specifications (RF and voice-controlled devices for order preparation in particular), Hardis Group's warehouse management software was flexible enough to be tailored to the specific requirements of the tire market just by adjusting its configuration. "One of the specific characteristics of our market, aside from the large number of items to manage, is that we receive large products loose from 40 manufacturers and most frequently ship them in packs of two", explained Maxime Banjac, supply chain projects and customer services manager at Allopneus. Reflex WMS' flexibility and ability to interface with the in-house ERP as well as the chosen WCS for pre-packing, plastic wrapping and automatic routing of orders to shipping bays also played a part in the decision. "The integration of TDI's Exlabel solution into Reflex WMS to automate the management of carriers' labels also impressed us", continued Maxime Banjac. In the end, Allopneus teams were won over by Hardis Group's guarantees that the WMS would be deployed in less than six months.

Deployment in under six months

The Reflex deployment project was launched. After configurations, building of interfaces with the ERP and WCS, change management, testing and release, the new Allopneus logistics platform received its first products in September 2017, and its first shipments were made in early October. "Reflex WMS has filled various gaps in our in-house ERP. It has enabled us to get rid of ten or so external tools (ETL, communication with the publishing system, etc.), which has cut IT maintenance costs", said Maxime Banjac.

Since Reflex was deployed, Allopneus has seen its logistics performance increase, particularly due to the end-to-end management of its logistics processes. "The solution enables us to quickly implement new processes. For instance, we unfortunately had a fire in the new warehouse in August 2018 and were able to get an overflow warehouse up and running in a week", added Maxine Banjac.

Over the coming months, logistics teams will work on optimizing service levels and reducing order preparation time to enhance customer satisfaction. "We promise to deliver orders placed before 2pm within 72 hours and offer next-day delivery if the order is placed in the morning. Our aim is to make more next-day deliveries", explained Maxime Banjac. There are also plans to implement Reflex Dashboard for overall logistics operations and performance management.

Allopneus.com is managing its new logistics platform with Reflex WMS